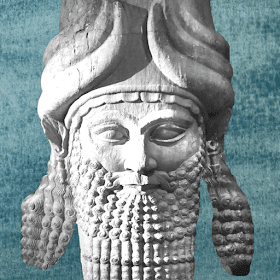 How relevant can a near one-hundred-eighty-year opera be to modern audiences when there is an autocratic, egotistic ruler who subjugates people of a different ethnicity and nationality to imprisonment and relocation from their homeland and who begins to act and think of himself as a god?  Unfortunately in 2019, a story that originates in biblical times and is the subject of Giuseppe Verdi’s first break-through opera, Nabucco, is perhaps more apropos than ever before, with examples of such leaders currently over-populating the globe, both near and far.

But what sets this historical tale’s ruler apart from most modern day despots is that this king, Nabucco (known in English as Nebuchadnezzar II), actually comes to grips with his own ego-inflated wrong-doings and completely transforms, in the end restoring to those he harms their nation, their lives, and their dignity.  If only it were possible to sit a few of today’s presidents, premiers, and princes in the audience of West Bay Opera’s Nabucco – the company’s opening production of its sixty-fourth season – in order for them to be as inspired and emotionally moved as was the opening night audience.

Nabucco, partly based on the books of Jeremiah and Daniel from the Hebrew Haftorah, relates the destruction of the Israelite’s Temple in Jerusalem by the invading Babylonian army in 587 BCE and of the subsequent deportation of the Jews to the victors’ homeland.  There, they are threatened with certain annihilation by the jealous, power-hungry daughter of the king, Abigaile, who seizes power from her father after he suddenly goes mad, his having been struck into babbling hysteria when declaring himself to be not king, but God.  But Abigaile is actually a former slave raised by Nabucco as his daughter.  His real daughter, Fenena, is a captive of the Israelites and has both fallen in love with the King of Jerusalem’s nephew, Ismaele, and has converted to his Jewish faith.

Abigaile herself has passion for Ismaele, who rejects her offer of his and his people’s release if he will now love her instead of Fenena.  Her resultant tantrum against him and her sister explodes, eventually to include her father and leading to her fiery decree for all of their demises.  Only a divine re-awakening by the fallen, shaken, former king and a plea by him for God’s forgiveness can save himself, his daughter, and his newly adopted people, the Israelites.

On the intimate Lucie Stern stage, West Bay Opera begins Verdi’s epic story with a stage-filling chorus of thirty-three who – with outstretched hands – sing the moving harmonies of a prayer to their God: “Do not let thy children fall prey to a madman who scorns your everlasting right.”  Especially when the women roll their voices in waves of supplication is this initial exposure impressively moving for a chorus that Verdi will give ample opportunities to be heard during the two-hour, forty minute (with two intermissions) evening.  While the chorus under direction of Bruce Olstad sometimes lacks a totally solid, male foundation, overall the efforts made as a total ensemble are impressive the entire evening.  That is especially true when the full group sings – first with subdued, then with harmonically moving and organ-like tones – Verdi’s most famous choral piece, “Va, pensiero, sull’ali dorate” (“Fly, thought, on golden wings”).

After the Israelite’s initial prayer, Zaccaria, the High Priest of the Jews, rises forth to assure his gathered flock in a fatherly, soothing bass that “on the shores of Egypt, He saved the life of Moses” and thus will save them, too, from the approaching enemy.  As the arm-outreached High Priest, Benjamin Brady time and again uses a deep-welled voice teeming in impressive richness to comfort Zaccaria’s people, even when the worst seems imminent.  Each time they begin to panic, his resounding voice rises to engulf them with renewed belief in God’s care and promised protection.  Even in their direst moments, Benjamin Brady’s glorious voice rises in the confidence his Zaccaria has of God’s power to overcome the greatest of odds, inspiring as in Scene 2, Act 4 an unsure Israel to echo their own re-found faith in twirling harmonies that surround his deeply voiced surety.

As Nabucco’s daughter Fenena, Clauda Chapa’s mezzo-soprano voice beautifully resonates an inner strength, courage, and resolve that will continue to grow in the course of the story.  Fenena declares boldly her new faith and her love for a man who is called enemy by her own father.  She will particularly shine when Fenena believes she is about to die at the hands of her diabolical sister, with Ms. Chapa bringing radiant clarity in notes round and full as she sings with full conviction, “My soul escapes already and flies to heaven.”

As Fenena’s lover and her defender even in the face of his own people’s wrath, John Kun Park’s Ismaele sings with a tenor voice that floats its high notes with ease and emotional fervor.  His voice intertwines in love and reverence with Fenena’s equally adoring tones as they recall how they first fell in love.  A highlight of the entire evening is when the two of them join near the end of Act One with the jealous Abigaile in a trio that is the one time Verdi gives us a heart-pounding glimpse of the depths of emotions welling within each in this triangle of love.

When she enters Jerusalem disguised as a soldier, Abigaile immediately sends chills down one’s spine as she uplifts a fearful voice to sing, “The thunderbolt of my revenge already hangs suspended over your heads.”  Christina Major is nothing short of astounding in this extremely demanding soprano role – one in which she meteorically goes in a mere split second from a frightful-sounding low to a heaven-touching high, with a voice overflowing with Abigaile’s felt destiny to rule.  At times, notes fall in caressing waterfall fashion down a scale that seems to be octaves in length.

Her Act Two aria begins with rolling torrents of sustained notes as she declares, “You will see my fury fall upon everyone.”  Her cries of purposeful revenge pierce the air in their soprano heights before suddenly collapsing to a depth most sopranos rarely travel.  But when she reflects of how she once spoke of “holy love” and “wept at others’ tears” – remembering her unfulfilled affection for Ismaele – Ms. Major transforms her vocals to a soft trembling as she holds note after note long enough for each to attach to the next in a loving embrace.  It is no wonder that at the end of this aria, Christina Major receives on opening night the loudest ‘bravas’ and the longest applause.

If there were any other of her many brilliant moments that perhaps one-upped this extraordinary aria, it is as her Abigaile stumbles and falls near the opera’s end to a self-inflicted death of poison.  Singing crumpled on the ground with a lovely English horn accompaniment (Meave Cox), she sends a whispered prayer to God of “Let me not be damned.”  Clearly, if for no other reason, Christina Major’s performance of Abigaile is a sure reason (among many) to secure a ticket to WBO’s Nabucco.

Normally, a review of Nabucco would focus on the lead character himself, whose developmental and spiritual journey is in many ways Verdi’s raison d’être for the opera.  Unfortunately, the baritone who will star in this role the rest of the run, Jason Duika, was unavailable opening night due to an allergy attack.  With only one day’s notice, Roy Stevens stepped into the role; and he deserves not only the voiced appreciation Artistic Director José Luis Moscovich gave him at the evening’s close, but also the admiration of all of us who attended.  It was clear, however, from his opening notes and appearance that the accomplished performer was under some strain and insecurity, undertaking the last-minute stand-in.  To his well-deserved credit, his confidence and the projection of his baritone vocals progressively grew stronger over the course of the evening, with his Act Four, Scene One prayer of forgiveness to the Hebrew God touching our hearts as well as surely the Almighty’s.  When he then declares to all Israel his love of God and his intention to rebuild the destroyed Temple, his Nabucco triumphs in a final, reverberating magnificence that leads into one of the chorus’ most exultant moments as they sing in full, a cappella harmony, “Great Jehovah.”

Layna Chianakas directs with great skill the comings and goings of such a large cast (forty-plus) on a relatively compact stage, one built with various levels of steps and platforms along with a great, stone wall of Babylon protruding from stage right as part of JF Revon’s set design.  Projections by JF Revon and Frédéric O. Boulay are mixed in their success in portraying the ancient Temple, Babylonia, and natural surroundings (with a projected sandstorm of sorts becoming a distraction in the build-up to Nabucco’s first appearance in Jerusalem).  Much more wowing are the array of Israelite and Babylonian costumes created by perennially award-winning costume designer Abra Berman, with her royal designs for Abigaile being particularly impressive.

Steve Mannshardt brings his normal genius to a lighting design that often trembles and dances in its shadow play over the steps of Temple, river shores, and a city’s famed hanging gardens.  Giselle Lee’s sound design assures proper balance among the wide assemblage of singers with the multi-level orchestra (located in the pit and on two levels of the stage’s both sides).  José Luis Moscovich conducts the twenty-five-plus orchestra with both exuberance and sensitivity, with the strings and winds especially time and again playing in manners guaranteed to impress and inspire.

To be able to enjoy an opera of as grand a scale as Nabucco by a company as accomplished as West Bay Opera in a setting as intimate as Lucie Stern Theatre is indeed a blessing for Silicon Valley.  Whether a regular attendee of operas on stages much larger and in halls much grander or a first-timer to opera altogether, one cannot go wrong securing a ticket to West Bay Opera’s wonderfully executed, beautifully resounding Nabucco – especially when given the gift of reveling in a Abigaile that surely rivals any that has ever played the role.